The HP TouchPad is the discontinued tablet that keeps on ticking. While the tablet originally shipped with the webOS operating system, hackers have been installing Android on it for ages  — and there hasn’t been an open source version of Android that couldn’t run on the TouchPad.

The software is a version of the CyanogenMod 10.1 custom ROM which has been compiled to support the HP tablet’s hardware.

At this point WiFi works, but sound does not. The user interface is slow, and the system is a bit too slow to be useful — it literally takes about 10 seconds for the automatic screen rotation to work. But now that CM10.1 can boot on the tablet, Campanele and others will be able to improve the experience before releasing Android 4.2-based ROMs to the public.

You can follow the progress of the project in the SickleROM thread at the xda-developers forum. 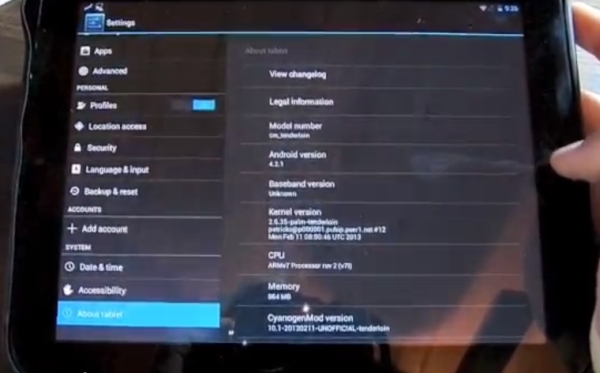 It was originally released in the summer of 2011 and sold for $499 and up. Responding to dismal sales, HP canceled the tablet less than two months later and sold off remaining inventory for as little as $99.

At that point, folks snapped up the tablet at the new bargain price, so there are still plenty of TouchPad tablets in the wild — many of which are probably running Android instead of webOS.