In other words, for $229 you can pick up a low-power computer with an open source media center, the hardware to handle high-definition video, and a fanless design which allows for silent operation 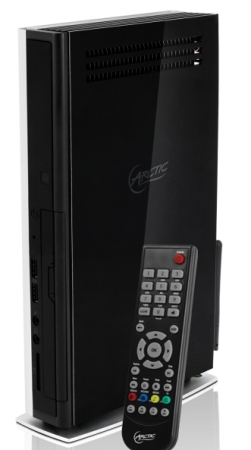 The Arctic MC001-XBMC ships with OpenELEC 3.0 and XBMC 12 software. You can plug the device into a television and use a wireless infrared remote to control media playback.

The PC has 2GB of RAM and a 1TB, 5400RPM hard drive for storing your music, movies, and other content. It features 802.11n WiFi and gigabit Ethernet.

If you want to watch or record live TV you’ll need to add an optional DVB-T/ATSC tuner – although I don’t actually see an option do to that at the Arctic website.

While the Atom D525 isn’t exactly a powerful processor for general-purpose desktop computing, when paired with the Radeon graphics this little laptop should make a pretty decent media center.

The XBMC 12 media center software makes the computer a pretty nifty TV companion, allowing you to handle audio, video, and photo content from your hard drive, local network, or the internet. And if you’re a fan of open source software, the fact that the MC001-XBMC ships with OpenELEC 3.0 rather than Windows has got to be a nice bonus (and it also helps keep the price of this media PC relatively low.