The Archos 80 Platinum isn’t the only new tablet from Archos that’s actually built by Chinese device maker Onda. The Archos 97 Platinum passed through the FCC this week, and it looks like this 9.7 inch tablet with a 2048 x 1536 pixel display and a quad-core processor is just a rebadged Onda V972.

The Onda tablet was released a few months ago, and it’s already available for purchase for around $250 — if you don’t mind ordering from a site that ships tablets directly from China. If you’d rather wait until you can get the same tablet from a Western company, the Archos 97 Platinum is available for pre-order from J&R for $299. 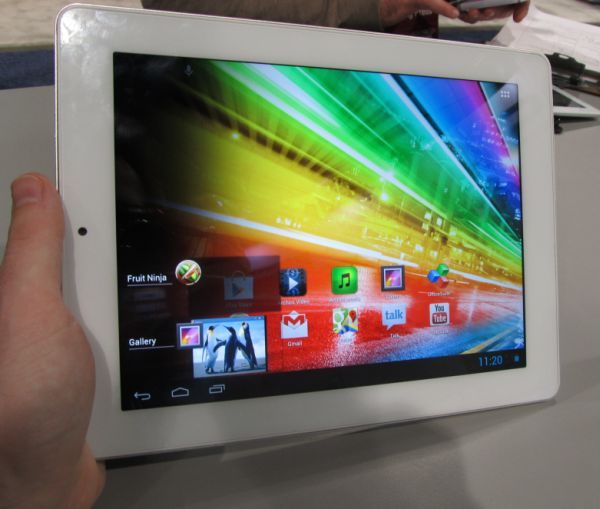 Like the Onda V972, the Archos 97 Platinum features an Allwinner A31 quad-core processor, 2GB of RAM, and Android Jelly Bean software. It has a microSD card slot, a mini HDMI port, and ships with full access to the Google Play Store and other Google apps including Gmail and Google Maps.

Note that while J&R says the Allwinner A31 is an ARM Cortex-A9 processor, it’s actually a Cortex-A7 chip which is similar, but which offers some performance tweaks.

While the high resolution display on the Archos 97 Platinum looks great, it takes a powerful graphics chip to power all those pixels. The Chuwi V99 tablet with a Freescale processor and Vivante GC2000 graphics I reviewed a few months ago was barely up to the task — the tablet felt fast at times, but seemed to get bogged down at others. I’ll be curious to see if the Allwinner A31 chip in the Onda V972 and Archos 97 Platinum is up to the task.

You can find some more photos and a video of the Archos 97 Platinum in my hands-on article from CES.