The company is introducing a new system called AMD Turbo Dock which automatically adjusts the performance of an AMD-powered tablet depending on whether it’s connected to a keyboard dock or not.

In tablet mode, you’ll still get support for 1080p HD video playback, 3D gaming, and other features. But you might not want to run CPU-intensive tasks that can drain your battery, so why does your CPU need to run at full speed?

According to AMD, its Turbo Dock technology can boost your CPU and GPU performance by up to 40 percent when you attach a keyboard dock.

That makes sense, because you’re more likely to use a Windows 8 tablet to perform traditional desktop tasks such as playing PC games or editing photos, videos, or documents when you’ve got a keyboard and touchpad attached.

Many (but not all) hybrid tablets also include an extra battery in the keyboard dock, so you’re less likely to run out of juice if you’ve got the keyboard connected. 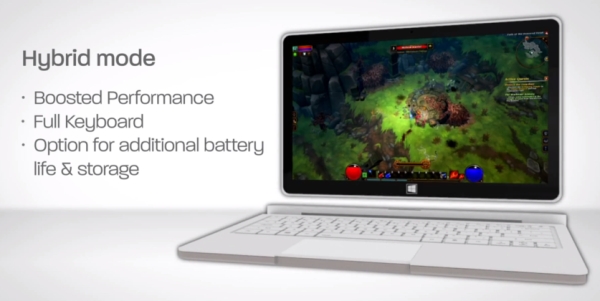 AMD says its Turbo Dock technology should be available later this year when hybrid tablets based on the AMD Temash platform hit the streets. Temash is a low-power chip that supports 2-4 CPU cores and AMD Radeon HD graphics with support for DirectX 11 graphics.