Want to run Android apps on your PC? A new app called WindowsAndroid lets you do that, but basically running Android 4.0 Ice Cream Sandwich on Windows as if it were a native Windows app.

Once WindowsAndroid is installed, you can use the web browser, gallery and other built-in apps, and with a little work you can even load and run additional third-party Android apps. 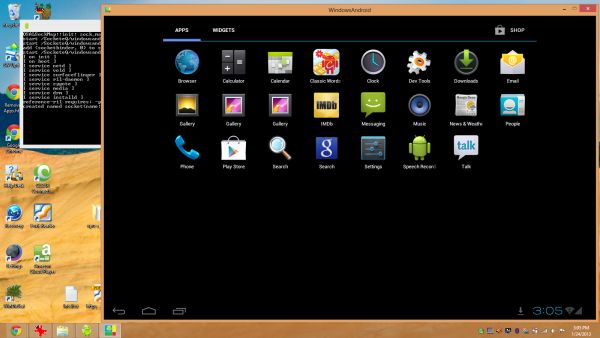 This isn’t the first time we’ve seen Android apps running on Windows computers. BlueStacks offers software that does something similar, and if you plug an FXI Cotton Candy any-screen PC into your computer, you can sort of use it to run Android apps on your PC screen.

But WindowsAndroid basically provides the full Android 4.0 experience on a Windows PC without any additional software or hardware. It includes the stock Android user interface, the Dalvik virtual machine which lets you run Android apps, and the ability to use your Windows PC hardware including your graphics card for hardware acceleration.

WindowsAndroid support computer with Windows Vista or later and supports most screen resolutions.

If you have a touchscreen device such as a Windows 8 tablet, you should be able to interact with Android apps using your fingers. But you can also use a keyboard and mouse to navigate.

WindowsAndroid is still under development, but you can request access to an early release build from the developer’s website.

The software’s a little buggy, and it crashed on me a few times while using it. But WindowsAndroid does exactly what it says on the tin, and lets you run Android on a Windows PC.

You can side-load apps by placing the APK files in the \SocketeQ\windowsandroid_root\data\app directory and then restarting the program — but I found that loading some apps in that directory caused WindowsAndroid to crash on startup.

You can also sort of install the Google Play Store by downloading the latest gApps package for Android 4.0, unzipping it, and copying the contents to the appropriate folders in \SocketeQ\windowsandroid_root\system. But the vast majority of Android apps in the Play Store will show up as incompatible with your device — and I had trouble getting any apps that are compatible to install properly.

In other words, WindowsAndroid is very much a work in progress. But when it works, it loads quickly, responds well to input, and lets you basically run Android apps on a Windows computer. It shows a lot of promise, but right now it’s more of a toy than a useful product.

10 replies on “WindowsAndroid lets you run Android 4.0 ICS as a Windows app”