Samsung’s Music Hub is a music streaming and discovery service which, among other things, can look at the music on your mobile device and create custom playlists from music you don’t own based on your tastes.

You can also upload your music to the cloud and listen to it across multiple devices (such as your PC or your phone).

Right now the only devices that support Music Hub in the US are the Samsung Galaxy S III and Galaxy Note II smartphones, but the company plans to roll out Music Hub for additional Samsung devices… and according to The Next Web, Samsung is also hoping to offer the service eventually for products not made by Samsung. 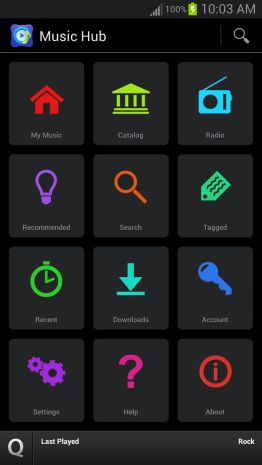 While Samsung is one of the top makers of Android phones and tablets, there are still an awful lot of folks using devices built by Asus, HTC, Motorola, LG, and other competitors. Offering Music Hub as an app that isn’t tied to a single manufacturer could be a way to pick up some extra revenue and build a stronger brand for Samsung’s software as well as its hardware.

On the other hand, while Samsung Hub (which is basically what the company rebranded mSpot after buying that company) has a few unique tricks up its sleeve, it will have to compete with popular music services such as Spotify, Rdio, Pandora, and Rhapsody. I’m not exactly sure why someone who buys an DROID DNA would feel the need to use Samsung’s streaming music app.