Pebble is a smart watch featuring a low-power, sunlight readable E Ink display. What makes the watch smart is that you can pair it with an iPhone or Android handset and use the phone to show called ID or incoming messages from email, Facebook, SMS, or other sources.

The company raised millions of dollars and took tens of thousands of pre-orders in a Kickstarter campaign last year, but the company’s had a hard time meeting its estimated ship dates.

Now Pebble says the watch is rolling off the production line, and it should start shipping soon. 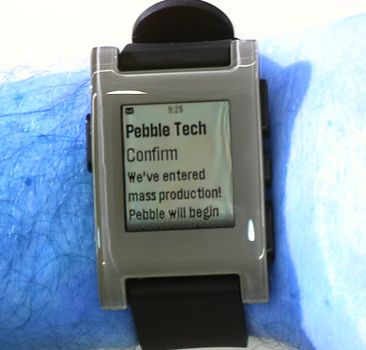 The first shipments will go out starting January 23rd, but it could take up to two months before everyone that’s ordered a watch will get one.

If you weren’t a backer of the project on Kickstarter, you can still pre-order a watch from getpebble.com for $150.

The watch features a 144 x 168 pixel ePaper display with a refresh rate of up to 30 frames per second. But you should be able to get up to 7 days of battery life on a charge. It features Bluetooth 4.0 to connect to your phone running Android 2.3 or iOS 5 or later.

Pebble says the phone is also water resistant enough to handle rain, splashes of water while you’re washing dishes, and other activities.

While the phone comes with a 22mm wristband, it’s changeable, so you can just pop out the watch component and slap on another strap.