I expect to see a lot of 4K (or UltraHD) televisions at the Consumer Electronics Show this week. What I wasn’t expecting to see were tablets with 3840 x 2160 displays. But that’s what Samsung just introduced. 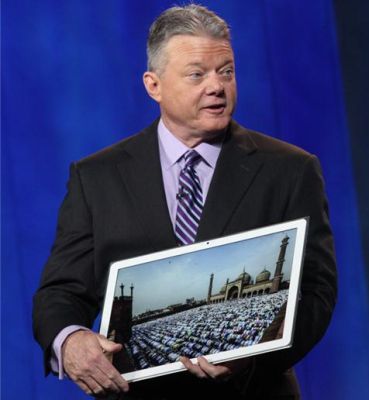 The device is a 20 inch Windows 8 tablet with a touchscreen display and a digital pen for more precise input.

Engadget reports that the tablet has excellent viewing angles, and CNET reports that Panasonic also offers some sort of cloud-based solution that lets you edit photos or other content on the tablet using a stylus (or your fingers), and sync the changes online.

While a 4K screen could be awesome for viewing high resolution photos or high definition TV, it feels like a bit of an awkward gimmick for a Windows 8 tablet. Unlike OS X, Windows 8 doesn’t usually do pixel-doubling well when you’re running desktop apps on high resolution displays.

Update: It turns out pixel-doubling does actually work pretty well on this tablet!

In other words, when you try to launch Microsoft Word, iTunes, or another desktop style app on a 20 inch, 4K tablet, you can expect to need a magnifying glass to read on-screen text — unless Panasonic has worked out some sort of software solution of its own.

Update: The tablet has a 1.8GHz Intel Core i5 Processor, NVIDIA GeForce graphics, 4GB of RAM, and a 128GB SSD. Gizmodo reports it can be a little sluggish when navigating through enormous documents.

The tablet is in the prototype/concept stage at this point and may never be released as a real product. It seems like Panasonic is just testing the waters at this point… and testing the capabilities of the hardware.

4 replies on “Panasonic shows off a Windows 8 tablet with a 20 inch, 4K display”