The One Laptop Per Child foundation may have dropped plans to release a Linux-based tablet running Sugar OS last year. But the company’s not done with the tablet space.

The new XO-4 laptop features a touchscreen display, which lets you use the rugged, low power Linux laptop in tablet mode. And the foundation is also introducing a new 7 inch Android tablet called the XO Tablet. 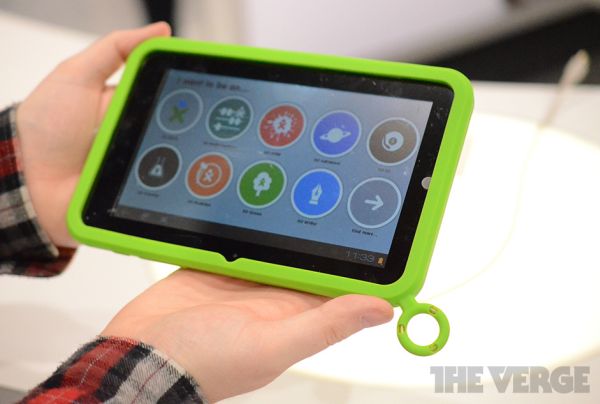 Unlike most XO products to date, OLPC plans to sell the upcoming XO Tablet at retail stores in the United States, including select Walmart stores.

While this model will be one of the first devices from OLPC to be widely available in the US, it’s still designed with developing nations in mind. In a nod to the fact that the kid-friendly tablet will be distributed in places where students may not have reliable access to electricity, you’ll be able to charge the tablet with a hand-crank.

Unlike most other products from OLPC, the XO Tablet doesn’t appear to have been designed from the ground up as a durable tablet meant for use in rough environments. Instead The Verge reports OLPC is basically slapping a rubber case on a rather average-looking 7 inch tablet to give it a bit of extra protection.

That should help keep the price low, although there’s still no word on how much the tablet will cost.

The tablet does run custom software designed that shares a bit of an aesthetic with the Sugar OS that runs on XO Laptops, including a heavy emphasis on circles and icons.