NVIDIA sees cloud computing as the future of gaming… or at least part of the future. By offloading the work of rendering graphics to a powerful server, you can run top tier games on a device with a low power chip like a smartphone or a tablet. But that’s just one benefit.

Another is that you can play the same game on multiple devices including a PC, a tablet, or a set-top-box, and you can pick up exactly where you left off when switching from device to device, the same way you can pick up reading a Kindle eBook or watching a Netflix video across different devices.

So NVIDIA is launching a new product called GRID, which is essentially a powerful server with NVIDIA graphics. 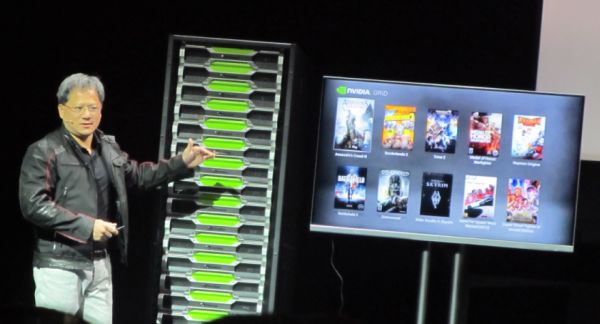 NVIDIA is marketing GRID to game makers that want to make their titles available via streaming, and a haf dozen companies have already signed on.

GRID clients will be available for PC or Android devices initially.

If the whole thing sounds familiar, that’s because it sounds a lot like the OnLive video game streaming service (which is facing serious financial difficulties) or Gaikai (which was acquired by Sony and may play a role in the next PlayStation console).

But NVIDIA says its system can stream HD-quality games with less lag than other cloud gaming services. We’ll have to wait for NVIDIA GRID to hit the streets before we can test that claim.