NEC seems to have a thing for dual-screen devices. The company has been showing off dual-screen Android tablets for the last few years, and now the company is bringing its first Android smartphone with twin 4.3 inch displays to market in Japan.

The NEC MEDIAS W has two screens which can unfold to sit next to one another, letting you see two apps at once or viewing a single app across both screens. 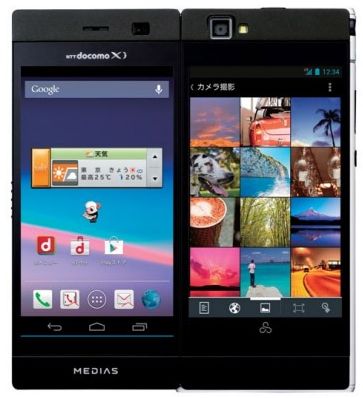 The MEDIAS W has a 1.5 GHz Qualcom Snapdagon MSM8960 dual-core processor and runs Google Android 4.1 Jelly Bean. It measures about half an inch thick, which makes it kind of chunky for a modern smartphone, but surprisingly thin for a dual screen device.

To help keep both screens powered up, the smartphone has a 2100mAh battery.

Japanese wireless carrier NTT Docomo unveiled the MEDIAS W as part of its new lineup and plans to start offering the phone in April. But as an NEC phone, it’s unlikely we’ll ever see this dual-screen phone in Europe or the US.

I guess we’ll just have to hold out hope for an updated Kyocera Echo.