If you’ve been paying attention to the Android TV stick space lately, you may already know that you can pick up a USB thumb drive-sized computer for about $60, run Android or Linux on it, and plug in a Motorola Lapdock to effectively turn it into a laptop.

But it’s kind of neat to see everything coming together in on short video.

Rikomagic UK’s Andy Kirby has posted a video showing a mini PC working as a Linux laptop, thanks to these three components:

The MK802 IIIs is a tiny device designed to let you run Android apps on your TV. It features a Rockchip RK3066 dual-core ARM Cortex-A9 processor and 1GB of RAM.

Motorola’s Lapdock is a discontinued line of products designed to let you use certain Motorola smartphones as laptops — but while Motorola isn’t pushing the platform anymore, you can pick up some Lapdock models dirt cheap and use them as keyboards and displays for other devices… like an MK802 IIIs.

Meanwhile, PicUntu is a new, light-weight Linux operating system based on Ubuntu 12.10. It’s designed specifically for devices with Rockchip RK3066 processors… like the MK802 IIIs. 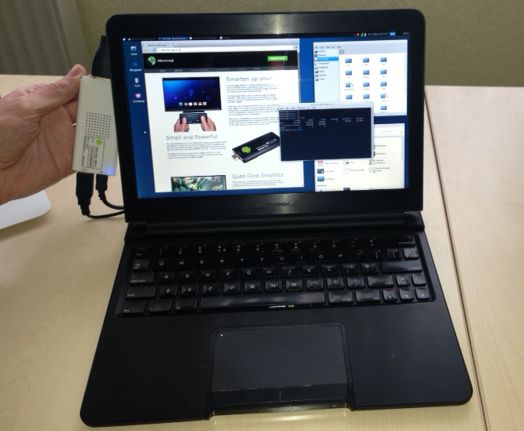 When you put those things together, you’ve effectively got a low power Linux laptop (with a few extra cables hanging around) that costs just over $100 to build. It’s not exactly going to win any computer processing speed records, but it makes a pretty nifty DIY project… and it might even be useful for some folks.

Update: While PicUntu doesn’t support hardware-accelerated graphics or video on devices with RK3066 processors yet, the CPU is fast enough to handle 720p HD video playback using software-decoding alone, as shown in the video below.