Microsoft has fingers in many pots these days, but there are still two pieces of software that most people identify with Microsoft: The Windows operating system and the Microsoft Office suite. The company released its latest version of Windows in October, and now the company’s new Office software is ready to go.

The company made some big changes with the launch of Windows 8 and Windows RT by emphasizing touchscreen support and enabling support for devices with ARM-based processors. Office is getting an overhaul that’s at least a big, with Microsoft not only pushing Office 2013, but also the Office 365 subscription-based service. 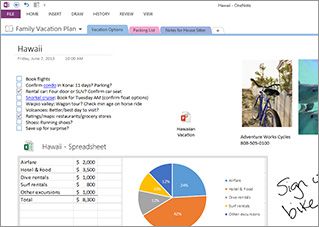 Here’s the idea: You can spend $139 or more for an Office license that lets you download and install the software on your computer.

Or you can pay $99.99 per year for an Office 365 Home Premium subscription. If you take that route, you can install Office on up to 5 different computers. The subscription also means you’ll always have access to the latest version of Office.

So if Office 2015 comes out while you’re still a paid subscriber, you can download and install the update for no additional fee.

Office 365 works on both Mac and Windows — but since the latest version of Office for Mac is Office 2011, that’s what you’ll get with your Office 365 subscription if you’re using OS X.

All told, it seems like subscriptions could save you some money if you plan to install Excel, PowerPoint, and Word on a couple of computers and you typically upgrade every time there’s a new version of Office available. But if you’ve been happy with Office 2003 for the last decade, there’s probably not much benefit in moving to a subscription service which will stop working when you stop paying.

Microsoft does offer a 1-month free trial though.

Personally, I’ve been using the free OpenOffice and LibreOffice suites for most of the past 10 years, but I’m also not an Office power user. I know plenty of folks who use features I’ve never even heard of, and aren’t happy with any office suite that doesn’t come from Microsoft.

Oh yeah, in addition to a new subscription-based option, Office also now offers a touch-friendly user interface for Windows 8 users, integration with SkyDrive, allowing you to automatically upload documents to the cloud and sync your data and settings across multiple devices.