The LG Tab-Book Z160 is a Windows 8 tablet and ultrabook rolled into one. Or rather, it’s an 11.6 inch tablet that hangs out on top of a keyboard.

When you want to use the computer as a notebook, just press a button on the side of the device and the screen pops up and reveals a keyboard. To use it as a tablet, just fold the screen down over the keyboard. 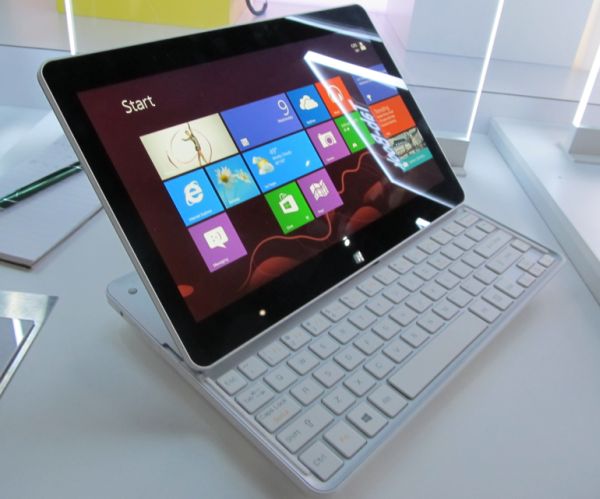 The Z160 is a bit heavy for a tablet, thanks to the included keyboard. But at 2.3 pounds, it’s pretty light by notebook standards, and feels like a pretty portable device.

It took me a few minutes to figure out how to switch between tablet and notebook modes, because you don’t pull on the screen manually the way you do with some other sliders. Instead, all you do is press a button. Hopefully that’ll reduce the wear and tear on the sliding mechanism.

It’s also just kind of fun to watch the screen pop up.

The keyboard is pretty comfortable to type on, and because of the way the tablet is designed, you should be able to place the Z160 on your lap to do some serious typing without worrying about the computer tipping over.

The Windows 8 ultrabook is powered by an Intel Core i5 Ivy Bridge processor and features 8GB of RAM and a 160GB solid state disk. It has an 11.6 inch, 720p IPS display.

Unfortunately there’s no word on whether this model will be available in the US or how much it would cost.