Need an external display for your laptop… but want one you can use on the go? Lenovo is launching a series of mobile touchscreen displays that you can pair with a laptop, tablet, or other mobile computer.

The Lenovo ThinkVision LT1423 Touch Mobile Monitors are 13.3 inch touchscreen displays which you can pair with a PC to mirror your screen or to use as a secondary display. 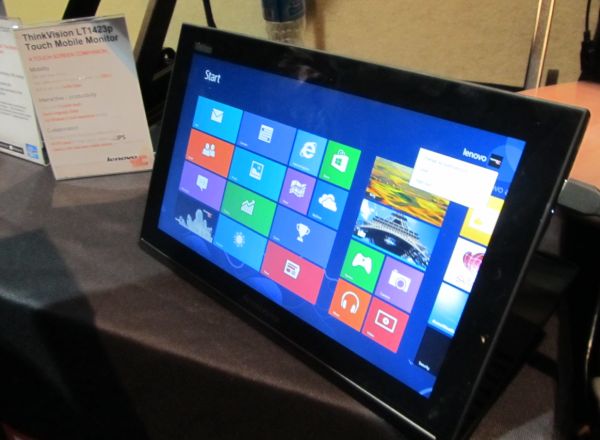 Lenovo has two different models in the works, a $349 version which weighs 1.6 pounds and connects to a PC with a USB cable, and a $449 model which weighs 2.4 pounds, connects over WiFi, and a built-in battery for up to 4 hours of battery life.

You can use either model to add touch capabilities (via a second screen) to a laptop that doesn’t already have touch — or if you can plug it into a tablet or laptop that already has a touchscreen so that you have two instead of one… that’s always better, right?

Since the higher-end model has a battery and doesn’t require any wires, you can kind of use it around the house like a tablet computer that just happens to be relying on your PC for processing power. The displays are just monitors and don’t have their own processors, RAM, or any of the other bits you’d expect to find in a PC.

The wired version should be available in the first quarter of 2013, while the wireless model is due out in June.