Lenovo has unveiled its first Chromebook, an 11.6 inch ThinkPad laptop designed for students in kindergarten through 12th grade. The Lenovo ThinkPad X131e adopts the design of Lenovo’s earlier ultraportable ThinkPad laptops, but swaps out Windows for Google’s Chrome operating system. 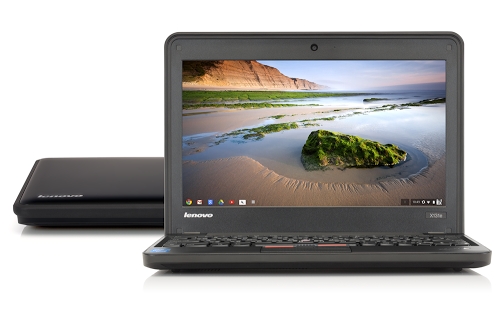 Lenovo’s first Chromebook weighs about 3.9 pounds, which might seem a bit heavy for an 11.6 inch notebook. But the ThinkPad X131e has a rugged design including a rubber bumper on the top cover, and sturdy hinges and corners that have been designed to withstand the rigors of use in a classroom (or business environment, although Lenovo is only positioning the Chromebook for use in education at the moment).

Update: Google says the ThinkPad Chromebook will get up to 6.5 hours of battery life and available for $429 starting February 26th, with an option for schools to sign up for support from Google for a one-time price of $30 per device.

Lenovo’s announcement isn’t a huge surprise. But it is the first indication that Lenovo is looking to play in Google’s Chrome OS sandbox.

Chrome OS is a light-weight operating system designed to support one app: the Chrome web browser. You can’t install any third party apps in Chrome OS, which means that it’s difficult to much things up yourself by slowing things down or contracting a virus.

Since pretty much every app you run on a Chrome OS device is a web app, they’re always up to date — developers just have to update their websites to provide you with the latest experience.

Chrome OS also downloads and installs updates automatically, so your system should also always be up to date.

Most of your data and preferences are stored online, which means that if anything does happen to your Chromebook you can pick up another one, login with your username and password and pick up exactly where you left off.

There are some down-sides to Chrome OS. The operating system isn’t that useful on airplanes or in other locations where you may not have internet access. And because you can’t install any software, it’s tougher to customize the experience or run certain types of apps.

But in an educational environment, some those limitations may seem more like advantages since they mean less work for network administrators.