Australian electronics retailer Kogan plans to enter the US market in February with a  5 inch, $149 Android smartphone that will be available contract-free. The idea is you’ll be able to pick up the Kogan Agora smartphone in the uS and use it on a pay-as-you-go plan from AT&T, T-Mobile, or an MVNO which works on those networks (such as Straight Talk).

The phone is already available for pre-order from Kogan. 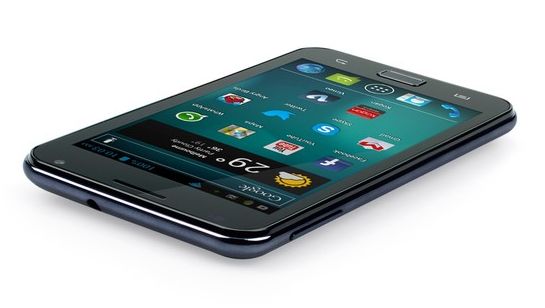 This isn’t the first time we’ve seen a company push a large Android phone as a contract-free device. Google sells unlocked Nexus 4 smartphones through its website for $349.

But the Google Nexus 4 is hard to come by, due to supply shortages.

Kogan’s phone offers a much cheaper alternative, and  since there’s no subsidy to help bring down the up-front cost of the phone, customers could save hundreds of dollars in wireless carrier fees they’d normally pay over the course of a 2-year contract.

Of course, a phone which sells for $149 isn’t going to offer bleeding edge specs. The Kogan Agora has a 1 GHz dual core ARM Cortex-A9 processor, 512MB of RAM, and just 4GB of built-in storage, although there is a microSD card slot for expansion.

The phone also has an 800 x 480 pixel display with a pixel density of 186 ppi, which is pretty low compared to the latest high-end smartphones.

Kogan is taking pre-orders for the $149 smartphone now, and plans to ship the Kogan Agora phone in mid-February

via CNET and Engadget