The XO Tablet is a new 7 inch tablet that the One Laptop Per Child Foundation hopes to sell this year for around $200. While it runs educational software designed by OLPC, it doesn’t have the same kind of rugged design as the XO Laptop.

Instead, it appears to be a cheap tablet with a sluggish processor, a touchscreen that’s not quite as responsive as it could be. 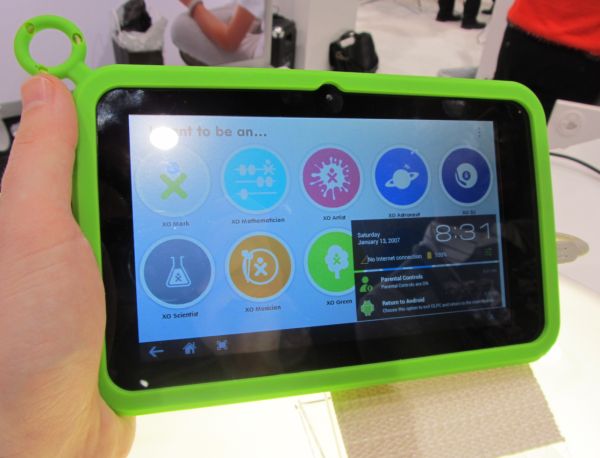 I found the XO Tablet at the Vivitar booth, where the company responsible for actually making the tablet was showing it off.

The tablet itself looks like a standard 7 inch Android tablet with HDMI, USB, and SD card slots and a textured plastic back that kind of reminds me of the rear panel on the Google Nexus 7.

Also included is a bright green rubber case that offers a bit of extra protection.

Under the custom user interface, the tablet is running Android 4.0, and on one of the models on display it was actually pretty easy to access a standard Android app launcher and home screen. But another unit seemed to be locked into the custom, kid-friendly user interface with an emphasis on educational games.

Update: Vivitar is apparently also selling a kid-centric tablet called the Camelio, which is the version of the tablet that was running a more standard Android interface at the booth.

For instance, apps are organized by  categories such as “artist,” “science,” or “astronaut.”

There are also parental controls which you can use to limit which apps a kid can access.

It should be available later this year from US retailers including Walmart.