Toshiba’s adding a bit of touch to its ultrabook lineup with the introduction of the Toshiba Satellite U845T. It’s a thin notebook with a 14 inch, 1366 x 768 pixel glossy touchscreen display and a starting price of about $800.

The Satellite U845T should be available for purchase in March, but Toshiba is showing off a prototype at CES this week in Las Vegas. 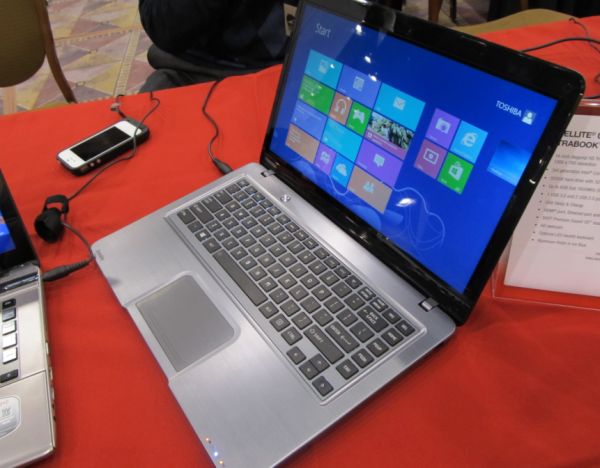 Under the hood lie the guts of a pretty standard mid-range ultrabook, including a choice of an Intel COre i3 or Core i5 Ivy Bridge processor, a 500GB hard drive and 32GB solid state cache disk, and up to 6GB of RAM.

The ultrabook features 1 USB 3.0 port, 2 USB 2.0 ports, HDMI, Ethernet, and SD card jacks, and the ability to use Toshiba’s sleep and charge software so you can plug in your phone or other accessories to a USB port and charge them even when the computer is off.

Like most 14 inch ultrabooks, the Toshiba Satellite U845W isn’t exactly the smallest or lightest notebook you’ve ever seen. But it’s a nice looking machine with a brushed metal case.

The demo unit I saw had an unusual screen bezel for a touchscreen notebook. There’s a thin plastic lip around the edge of the touchscreen which can make it difficult to swipe from the edge of the screen — something you want to be able to do in Windows 8 for quick app switching or for bringing up the Charms menu.

A Toshiba rep told me that the demo unit I was looking at wasn’t the final hardware though, it was just meant to show what the U845T will look like when it ships, so hopefully the bezel will be improved.

The screen also wobbled a bit when I tapped it, but Toshiba is working to adjust the torque on the hinges, so hopefully the touchscreen won’t be quite as shaky when the laptop ships in a few months.