The Gigabyte S1185 is a Windows 8 tablet that should ship soon for about $1000 and up. It features an 11.6 inch, 1920 x 1080 pixel IPS display and an Intel Ivy Bridge processor, but those aren’t the only things that set the S1185 apart from most other Windows 8 tablets on the market today. 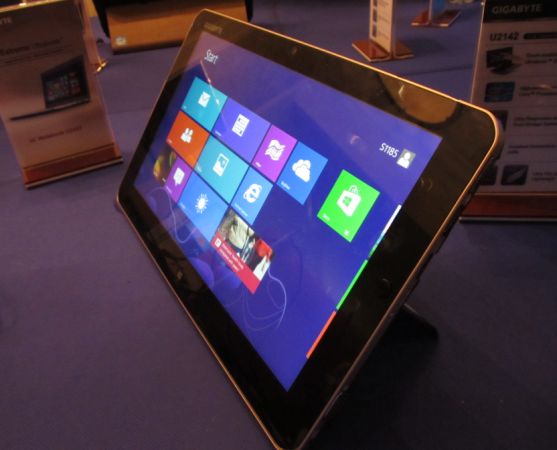 Gigabyte includes a number of features that you don’t often see on tablets, including an optical sensor on the right side of the screen which you can move your thumb over to control an on-screen cursor. You can then use buttons on the left side of the tablet to left or right-click.

In other words, you can use the capacitive touchscreen to navigate through Windows, but you can also grip the tablet in both hands and use the sensor and buttons as if you were using a physical mouse or touchpad.

It takes a little while to get used to the optical touchpad, but it can make Windows 8 desktop-style apps easier to use on a touchscreen tablet — especially one with a high resolution display like the S1185.

Other unusual features include:

Gigabyte will offer the tablet with Intel Core i3 and Core i5 options, from 64GB to 256GB of storage, and up to 8GB of RAM.

There’s also an optional keyboard dock with a magnetic mechanism for locking the tablet into place. The keyboard doesn’t have a battery, which makes me wonder why Gigabyte expects to be able to sell it for $129. But the keyboard is very thin and light, which means you can carry it around with the tablet without adding much weight to the 2 pounds S1185 tablet.

You should be able to pick up the Gigabyte S1185 starting in April.