Google’s Native Client, or NaCl is a platform that lets the Chrome web browser run certain apps written C or C++ instead of the usual web languages such as HTML5, CSS, and JavaScript. In other words, developers can use the same tools to write web apps for Chrome as you would use to write native apps for a PC or mobile device.

One of the best known NaCl apps for Chrome is probably the Netflix app, which you can use to stream Netflix videos on a Chromebook even though the Netflix website usually only supports Mac and Windows computers.

Up until recently NaCl was only available for computers with x86 processors. But starting with Chrome and Chrome OS 25, Google is adding support for ARM-based chips. 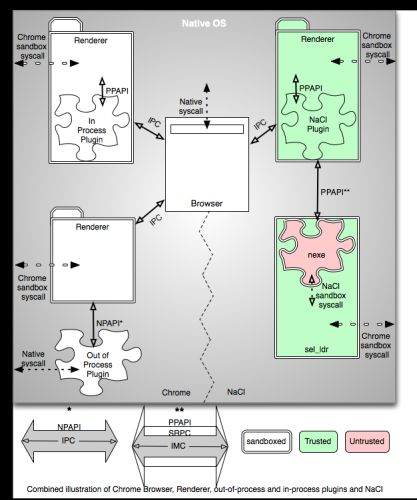 That doesn’t mean every NaCl app in the Chrome Web Store will automatically work on a Samsung Series 3 Chromebook or other device with an ARM-based chip. But the process for porting apps to work on ARM is pretty straightforward, which means that we could soon see Netflix and other NaCl apps running on ARM-based devices.

A few other apps built with NaCl include ports of the Quake and DOOM video games, and a DosBOX app called NaClBox.

While Chrome 25 and later will support NaCl on ARM-based devices, that only covers Chromebooks and PCs. The Google Chrome browser for Android doesn’t yet support any plugins or extensions, which means that you won’t be able to run games, video streaming services, or other NaCl apps in a Chrome browser on your Android phone or tablet yet.

Chrome OS 25 is currently available as a developer preview. The latest stable build of Chrome OS is version 23.

Google also plans to roll out Portable Native Client this year, offering developers the ability to write apps once and make sure they an run on any chip architecture, including x86 and ARM.

6 replies on “Google Chrome for ARM gets Native Client (Support for Netflix, other apps on the way)”