The $99 Ouya video game console is expected to ship in April, 2013. But it may not be the only inexpensive Android-based game console available at that time. A company called GameStick has just launched a Kickstarter campaign to raise money for a similar device designed to bring Android games to the TV.

The GameStick is a USB thumb drive-sized device which has an ARM Cortex-A9 processor, a wireless game controller, and a specially designed user interface made to let you navigate through your games on a big screen television.

A pledge of $79 or more is what it takes to reserve a GameStick — but the project is only funded if the team reaches its goal of raising $100,000 or more by February 1st.

The stick itself features an Amlogic 8726-MX processor, 1GB of RAM, and 8GB of flash storage. It runs Google Android Jelly Bean and features built-in support for 802.11b/g/n WiFi and Bluetooth 4.0.

There’s an HDMI port on one end, and you can plug the stick directly into a TV to run games on a big screen. If you have an MHL-compliant TV, the stick will be able to draw power directly from the TV.

You control games using a Bluetooth controller that looks a lot like a typical video game console controller, but it has a slot that you can insert the GameStick into when you’re not using it, for easy storage.

The hardware looks awfully familiar. We’ve seen a number of inexpensive Android TV sticks from China which look just like the GameStick, and which feature similar hardware.

What’s different about the GameStick is the game-centric software interface, the specially designed game controller that will ship with the stick, and the team behind the project which includes the folks behind the PlayJam platform for bringing video games to Smart TVs. 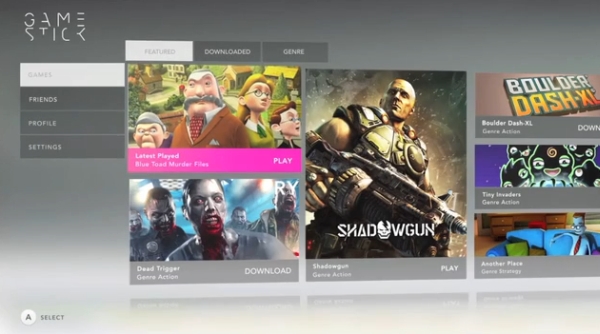 The hardware is still under development and the GameStick team is still working with app developers to make sure their titles will work with the final system. But about 200 Andorid games are already supported, and like most Android games, most will be available to play for free or just for a few dollars.

Users will be able to download games from the internet to their devices to play — and GameStick is also looking into using CiiNow to stream some video games to the console over the internet without first downloading the whole game.

If the team meets its fundraising goals, the first units are expected to ship to Kickstarter backers in April. Eventually PlayJam hopes to sell GameStick devices through retail channels as well.