A team of independent developers is getting ready to release a tool for jailbreaking an iPhone, iPod touch, or iPad running iOS 6.0 or iOS 6.1. It’s called evasi0n, and according to one of the developers, it could be ready to launch within a week.

Update: It’s is now available for download from evasi0n.com. 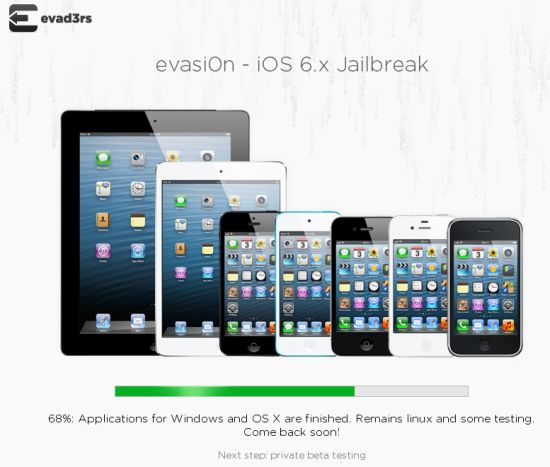 You can keep tabs on the progress at the evasi0n website. The goal is to release tools that let you use a Windows, Mac, or Linux computer to jailbreak your device.

You can also keep up on the progress by following the evad3rs team on Twitter.

Technically, it’s already possible to jailbreak a device running iOS 6.0 or later — but the only tools that are publicly available are for performing a tethered jailbreak. That means if you need to reboot your phone or tablet, you’ll need to plug it into your computer and run the software again.

Evasi0n is an untethered jailbreak, which means your device will remain jailbroken even after a reboot. The only way you’ll lose your jailbreak is if you restore from a backup or install a future software update from Apple.

Jailbreaking an iOS device allows you to run code that’s not officially supported by Apple, including third party apps that aren’t available from the App Store and software that can change the look and feel or other core functions of the operating system.

In order to jailbreak a device, hackers have to find a security hole in the software that they can exploit to shoehorn unsigned code onto the device. The evad3rs team of hackers had already found a hole in Apple’s latest versions of iOS a while ago, but they were waiting until iOS 6.1 was officially released before launching their tools — to make sure Apple didn’t have a chance to patch the security vulnerability before evasi0n was released.

4 replies on “Evasi0n iOS 6.x jailbreak could launch within the week”