Ubuntu Phone OS is a Linux-based operating system for smartphones that could show up in handsets that will hit the market in late 2013 or early 2014.

But Ubuntu’s parent company Canonical is already showing off early builds of the software running on the Samsung Galaxy Nexus smartphone — and in the coming weeks Canonical will release software that lets anyone install Ubuntu on a Galaxy Nexus to try the operating system early. 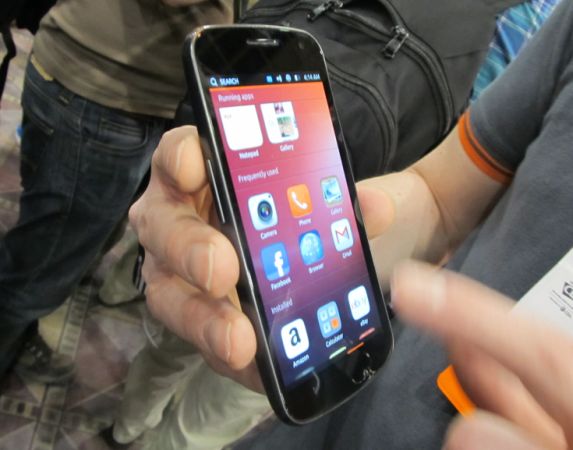 While Ubuntu Phone OS shares many visual elements with the Unity desktop environment from the full desktop version of Ubuntu, the OS and the user interface have been optimized for mobile devices.

At this point that means, among other things, that you can’t just install full desktop apps like LibreOffice or GIMP on a device running the Phone OS. But eventually you may be able to do that. While those apps won’t run properly in phone mode if they’re not optimized for that UI, you’ll eventually be able to dock your phone to a keyboard, mouse, and monitor and run full desktop style apps on a big screen.

In other words, instead of synchronizing your music, movies, documents, and other data between your phone and your PC you’ll be able to treat your phone as your PC. Carry it in your pocket and it’s a phone. Plug it into a desktop docking station, and it’s your PC.

It’s an interesting idea, but Canonical clearly faces an uphill battle in making it happen. The company will have to convince handset makers to use the software, wireless carriers to support it, and users to actually buy products running Ubuntu Phone OS.

While an obvious target audience would be folks already running desktop Linux operating systems, the phone OS really feels a lot more like an Android, webOS, BlackBerry, or iOS kind of operating system than traditional Linux. There will be an app store, no official terminal app (that I’m aware of), and an emphasis on apps written in HTML5 or QML.

Canonical is also trying pretty hard to monetize the product. Not only will it involve the same Amazon shopping lens that’s caused controversy in the desktop Ubuntu community, but Canonical also plans to dedicate a portion of the apps menu to “apps available for download,” so it can show promoted apps as a way to generate revenue.

Fortunately, the system is based on open source software, which could make Ubuntu Phone OS much easier to hack and modify than most other smartphone operating systems. So I suspect if and when the software makes it to market, we’ll see an awful lot of third party customizations.