Google Android lets developers create apps that behave differently on phones and tablets. For instance the default Gmail app has a two-column view on a tablet, but if you use the exact same app on a phone, you only see one column. Some apps, such as personal finance tracker Mint or photo editing app Photoshop Elements offer more features and more powerful views on tablets than phones.

But if you have a rooted phone with a high resolution display, it’s possible to run many apps in tablet mode on your Android smartphone — and you can do it on a per-app basis, which means you don’t have to use the full tablet user interface on your phone just to get a two-column view in your email app. 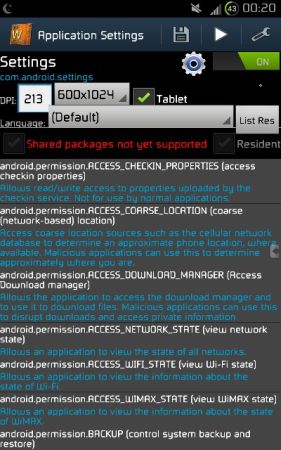 All you need to do is change the DPI settings associated with each app so that the software thinks you’re using a tablet instead of a phone.

This is a feature that comes baked into the Paranoid Android custom ROM for many smartphones. But you don’t need to wipe your phone’s software and install Paranoid Android to change per-app DPI settings.

You can also install the Xposed Framework and the Xposed App Settings plug-in. The apps should work on many Android phones that have been rooted.

Xda-developers forum member xperiacle has posted details on the process, as well as step-by-step instructions and a few examples for how to your settings to enable tablet mode for various apps including the camera, Play Store, and phone dialer.

But in a nutshell, all you have to do is install the framework and plugin, launch it once to grant it root permissions, reboot your device, and then start playing with the available settings.

It’s also a good idea to backup your device first in case anything goes horribly wrong. Note that adjusting some of these settings can lead apps to look awful — or for text to be too tiny to comfortably read on your mobile device. You may have to play around with the settings for a while before you find the best options for each app.