WiFi routers are a dime a dozen these days… or around $20 to $30 anyway. But the Asus WL-330NUL Pocket Router breaks the mold a bit.

It’s a WiFi router that’s small enough to fit in your pocket. It can also draw power from a USB port so you can use it with your laptop on the go without carrying around a separate power cable. 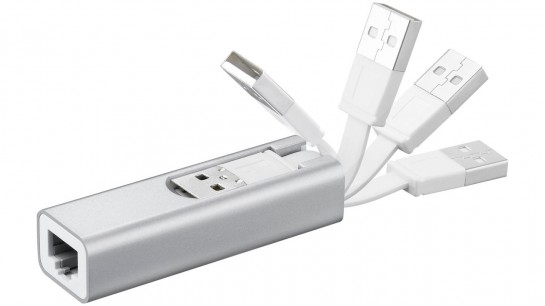 On one of the Asus WL-330NUL you’ll find an Ethernet jack. You can plug in a cable from your modem or from a wired connection at a hotel. Then you can use the tiny router to share that wired connection wirelessly with multiple devices.

At the other end of the router there’s a USB adapter (which folds down into a slot in the case when you’re not using it). You can use this for power — or you can plug the USB port into a computer and use the router as a USB ethernet adapter for laptops that don’t have full-sized Ethernet jacks.

The router weighs less than an ounce. I wouldn’t expect it to provide the strongest signal you’ve ever seen from a router, but it could prove a useful tool for road warriors that want to connect multiple laptops, tablets, phones, and other devices to their hotel internet connections.

Asus hasn’t yet announced the release date or price for the Pocket Router.