The Samsung Galaxy Note 8 leaks keep on coming. The head of Samsung’s mobile division recently confirmed that the company was working on an 8 inch Galaxy Note tablet, and earlier this week we saw what may be a brochure for the new tablet. Now italian site DDay.it has obtained a few images of what looks like an 8 inch Galaxy tablet in the wild. 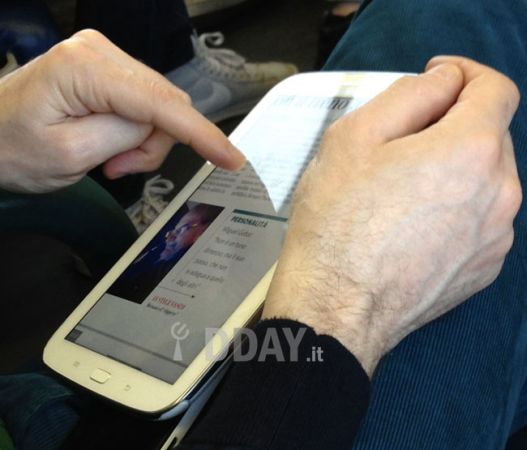 Actually, what it looks like is a large  Samsung Galaxy S III or Galaxy note smartphone. The photos even show the same buttons Samsung uses on its phones hanging out below the screen.

The makes a bit of sense, since 7 and 8 inch tablets are pretty much designed to be held in portrait mode, like phones, while larger tablets work best in landscape orientation. So while Samsung’s 10 inch tablets are button-free, an 8 inch model might look like a big phone.

Or maybe these images are just Photoshopped.

The tablet is expected to have a 1280 x 800 pixel display, a quad-core processor, and 2GB of RAM. If we’re really looking at a Galaxy Note product, it will also use Samsung’s S Pen system which includes a pressure-sensitive pen and software that lets you write and draw on the tablet.

Samsung is expected to officially unveil the Galaxy Note 8 at Mobile World Congress in late February, where the company may also have a few additional tablets and phones to show.

3 replies on “8 inch Samsung tablet spotted in the wild”