The VIA APC is a single-board mini-computer with an ARM-based processor and a $49 price tag. It’s basically what you’d get if you designed the popular Raspberry Pi with more input and output options and used a VIA processor instead of a Broadcom chip.

But the $49 price tag is a bit deceptive… since VIA charges $38 to ship the little computer anywhere outside of Asia.

Now VIA’s offering free international shipping — when you buy two units. So instead of spending $87 on one APC computer and shipping, you can spend $98 and get two mini-computers delivered to your door. 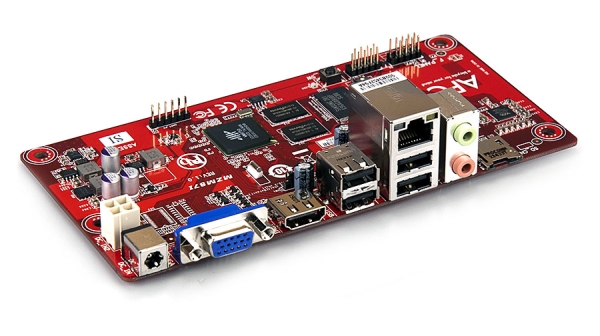 The promotion runs through January 2nd, and you can order from the APC.io website.

While the VIA APC isn’t as popular as the Raspberry Pi, there are stories of folks designing interesting projects around this little computer in the APC forum. It ships with Google Android 2.3 and developer have been porting various desktop Linux operating systems to run on the platform.

Most of the interesting hardware projects involving the APC that I’ve seen involve building interesting cases for the computer. But at least one user has used the APC as the foundation for a video game arcade cabinet.

The single-board computer is on a NEO-ITX board, which is compatible with Mini-ITX and MicroATX form factors… which means you may be able to slot the APC into an existing PC case.

If you don’t need two units, you can also save a few bucks by ordering from Newegg. The US retailer charges $66 for a single APC, including shipping.

7 replies on “VIA APC mini-computer sale: Buy 2 for $98, get free international shipping”