It looks like Acer may have a new budget tablet in the works. An unannounced tablet called the Acer B1-A71 showed up this week at the FCC website, and the GLBenchmark website has test scores for a device with the same name.

While Acer hasn’t provided any details on a price or launch date, the B1-A71 appears to be a budget tablet with a 7 inch display and a colorful, protective case. 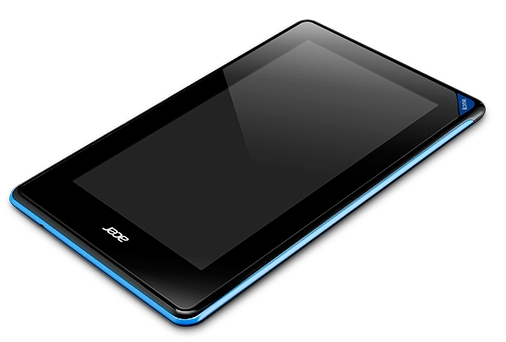 The tablet appears to have a 1024 x 600 pixel display, a 1.2 GHz processor, and PowerVR SGX 531 graphics. According to benchmark results, it’s currently running Android 4.1.2 Jelly Bean software, although that could always be updated to Android 4.2 by the time the device launches.

FCC documents show that the tablet supports WiFi, but not 3G or LTE… which doesn’t mean we won’t see another version with those features eventually. In fact, the label drawing shows a spot for a SIM card cover, which suggests that Acer does plan to launch a model with mobile broadband at some point.

The screen resolution is probably our best hint that Acer doesn’t plan to charge an arm and a leg for this tablet. With Amazon, Barnes & Noble, and Google/Asus all selling 7 inch tablets with 1280 x 800 pixel displays for under $200, it’s kind of hard to imagine Acer expects to charge more than that for a model with a lower resolution display.

Interestingly, Acer recently launched a budget tablet with similar specs called the Iconia Tab A110 — but the label drawings suggest that the B1-A71 is features a new design.

Update: Phone Arena scored some leaked product images and additional specs. The tablet reportedly features a Mediatek dual-core processor, 512MB of RAM, and 8GB of storage as well as Bluetooth, GPS, and a microSD card slot.