The Raspberry Pi is a $35 computer board with a built-in processor, memory, and input and output. But if you want to use it as a full-fledged computer you need to connect some storage, a keyboard, display, and other peripherals.

Most people probably do that by plugging in a monitor and USB keyboard and mouse. But hacker Nathan Morgan decided to use the Raspberry Pi as the guts of a tiny laptop computer with a 3.5 inch display, a thumb-keyboard, solid state disk, and rechargeable batteries. 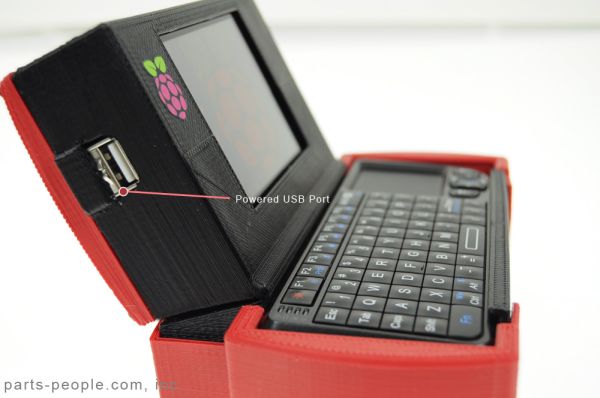 He calls it the Pi-To-Go, and it’s a fully functional computer running Raspbian Linux. It gets up to 10 hours of battery life thanks to the low-power ARM-based processor and a reasonably large battery pack.

The end product includes more than $400 in parts… so if you’re really just looking for a cheap Linux laptop, you’re probably better off buying an old netbook and installing Ubuntu on it. Not only is that a cheaper way to go, but you’ll end up with a speedier system.

But there’s something incredibly cool about Morgan’s little computer, which features a 64GB solid state disk, a mini keyboard with an integrated touch area, a powered 7-port USB hub, and a 3D printed case.

Morgan’s design also includes an LED which illuminates a Raspberry Pi logo on the back of the case when the computer’s in use.

You can find a parts list, 3D printer files, and instructions for assembling the system at Nathan Morgan’s blog.