Rikomagic has released software updates for the and MK802 III Android mini computers which let you use your Android phone or tablet as a remote control for one of these little sticks while it’s plugged into your TV.

In other words, not only can you now plug an MK802-type stick into your TV to run Android apps on the big screen while using a mouse or keyboard — you can also use an Android device as a touchscreen controller. 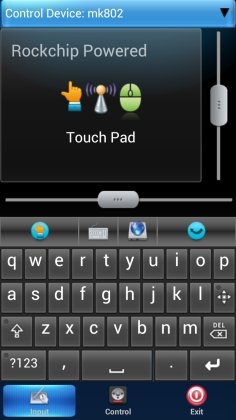 The MK802 III are tiny Android PCs that are about the size of a chunky USB flash drive. It has a dual-core Rockchip RK3066 ARM Cortex-A9 processor.
You can download the latest software directly from the Rikomagic website. Updating the firmware is as easy as loading the update.zip file on a microSD card, inserting it into the device, turning it on, and then following any on-screen instructions.
In addition to the new remote control feature, the software updates come pre-rooted, and let you use the device as a WiFi hotspot (assuming it’s connected to a mobile broadband module).

I took the new software for a spin on an MK802 III this afternoon, and the new remote control feature is pretty great.

Unfortunately it’s also a little finicky, because it relies on a connection to your wireless network — and the MK802 III has a tough time staying connected to my network.

The updated firmware is based on Google Android 4.1 Jelly Bean and includes access to the Google Play Store. But what’s new is the companion Remote app which you can install on another Android device to use it as a remote control for one of the mini PCs — as long as all your devices are connected to the same wireless network.

This isn’t the first time we’ve seen this sort of software for an Android mini PC. This summer developer zulu99 released an unofficial firmware update for the original MK802 which incorporated his DroidMote app.

But it’s nice to see this sort of feature coming directly from one of the companies that makes these mini PCs.

The Rikomagic app is also easy to use and pretty versatile. The first time you fire it up the app will scan your network looking for a compatible MK802 device. Just choose your device from the list and you’re on your way.

From there you can use your phone or tablet as a touchpad to move a mouse cursor across your TV screen. You can also bring up a keyboard to start typing, or turn your phone into a touchscreen controller — allowing you to pinch to zoom, scroll through websites, or even play games on your TV.

The MK802 remote app can also use your phone or tablet’s gyroscopic sensor for motion-based input.

There’s a Control tab that brings up a more traditional remote control-style interface, with direction buttons, home, back, menu, and search buttons, and more. This view also has a power button.

Pressing it once disables the display on the MK802 III just as if you’d tapped the power button on a tablet. Or you can completely shut down your device by pressing and holding the power icon until a pop-up asks if you’d like to power off.

Once you do that, though, the only way to turn your mini PC back on is to unplug and reconnect the power source.

Theoretically, the MK802 III should be more than fast enough to handle HD video playback, Android video games, or streaming media over the internet. It has a speedy 1.6 GHz dual core CPU, 1GB of RAM, and 8GB of storage.

But I didn’t get a chance to try many of these things, because the internet connection kept fading in and out as the MK802 III struggled to stay connected to my wireless router. You may have better results if you use the TV stick with a USB WiFi adapter… or if you place it close to your router.

While I’m impressed with the software update, I’m a little underwhelmed by the flaky built-in WiFi capabilities of the MK802 III I tested.

Rikomagic plans to release a similar software update for the MK802 II (with an Allwinner A10 single core processor) soon.

W2Comp sent Liliputing an MK802 III to try out (and we’ll be giving it away soon as part of our Holiday Giveaway. But the devices are available from a couple of different retailers that ship this sort of device from China, including: