The folks behind the popular Plex media center software have released a new app designed for Windows 8 — and it’s available from the Windows Store for $2.99.

That’s about $2.99 more than the price of the desktop app, but it’s still a pretty small price for a slick looking app for organizing, accessing, and streaming your music, movies, and photos. 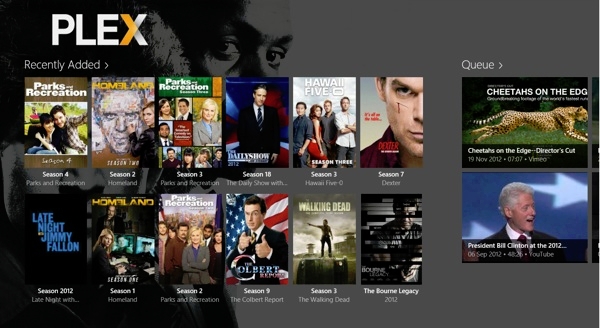 If the new Windows 8 app looks familiar, that’s because it borrows a lot of features from the iOS, Android, and Windows Phone 7 versions of Plex. Like those apps, the new Windows 8 version is designed to be touch-friendly, although like most Windows 8 apps, you can navigate the user interface with a touchpad or keyboard and mouse if you don’t happen to have a touchscreen handy.

Plex doesn’t just organize the media stored on your Windows 8 computer. You can also set up a Plex Media Server on another PC and use it to stream content from a home theater PC to your Windows 8 tablet, notebook, or other device.

Plex also offers a myPlex service which lets you share servers with friends and connect to their servers to stream media.

While Plex is hardly the only media center app available for Windows computers (I’m looking at you, XBMC), it’s one of the first and most feature-packed to hit the Windows Store.