The Raspberry Pi is a tiny, inexpensive computer which has been making waves since it launched earlier this year. The price is part of the appeal: you can pick up a model B for $35, or a stripped-down model A for $25.

But another thing that makes the Raspberry Pi exciting is its open nature. It can handle a range of open source operating systems and run thousands of apps. Now the folks behind the little computer are trying to make it easier to find some of those apps in one place. 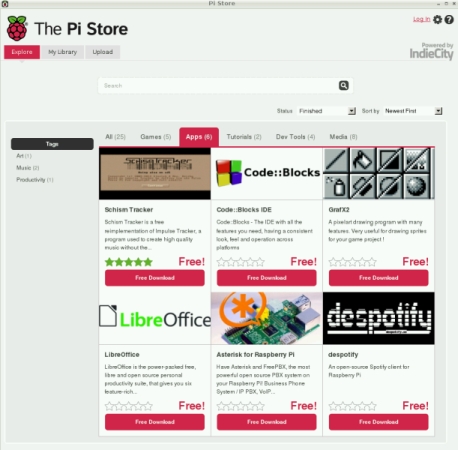 Raspberry Pi, IndieCity, and Velocix have launched the Pi Store, a place to download games, utilities, and other apps.

At launch the pickings are kind of slim. There are 23 apps available. The good news is that most are available for free. The Pi Store also supports paid apps though. There’s also a tip jar for folks that want to donate to support the developers of free apps.

The Raspberry Pi project was initially designed as a way to get low-cost computers into the hands of students, and in keeping with that, the founders of the new store are hoping the Pi Store gives young folks a chance to create software and share it with a large audience.

Anyone can submit apps to the store — but the Pi Store is moderated, which means that apps can be rejected.

The Pi Store will also distribute books, magazines, and other content in addition to software.

You can browse the store by visiting store.raspberrypi.com in a web browser. Or if you want to use the store on a Raspberry Pi computer, you can download a version of the Raspbian Linux operating system with the store included or install the “pistore” package using apt-get.

More details are available at the Raspberry Pi blog.