Kobo is temporarily cutting the price for the Kobo Mini eReader to just $49.99. The 5 inch eReader normally sells for $80, but US retailers including Best Buy will offer the Mini for $50 from December 21st through December 23rd, 2012. 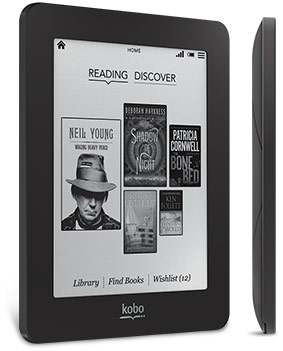 The Kobo Mini weighs less than 5 ounces, measures about 0.4 inches thick, and has a 16-level gray scale E Ink display with touchscreen navigation.

It features 802.11b/g/n WiFi, has 2GB of built-in storage, and Kobo says you should get up to a month of battery life… if the WiFi is disabled.

The Kobo store offers millions of books, newspapers, and magazines… much like the B&N NOOK and Amazon Kindle stores. Kobo has generally lagged behind those competitors in the hardware space, but $50 is a pretty great price for an eReader.

Basically for the cost of two hardcover books you get an eReader which can handle EPUB, PDF, MOBI, TXT, HTML, and other file formats… including CBR and CBZ comic book files.

On the other hand, while the Kobo Mini is more pocketable than the 6 inch eReaders that are all the rage these days, the small screen isn’t much larger than a smartphone display. So if you’ve already got a good phone, you can probably save a few bucks by just installing an eReader app on that.