Google advertises the Nexus 4 as an Android smartphone with support for HSPA+ data speeds. But as some folks have discovered, there’s actually a 4G LTE chip inside, and if you’re in Canada you can use it to connect to the Rogers or Telus networks.

While most AT&T customers in the US are stuck using the (somewhat) slower HSPA+ capabilities, it turns out that in a few parts of the country, AT&T does use a wireless band supported by the Nexus 4. And if you’re lucky enough to be in one of those spots, you can use the Nexus 4 as a 4G LTE device in the States. 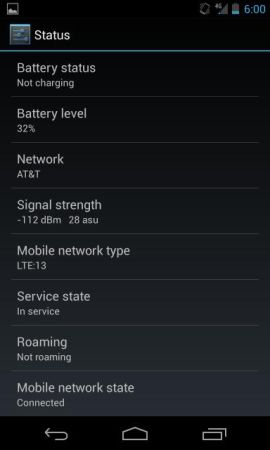 The reason the Nexus 4 has an unadvertised LTE chip is that it’s basically got the guts of the LG Optimus G phone — and when LG adapted that phone to meet Google’s specifications, it was cheaper and easier to just leave the chip inside (but not fully functional) than to remove it.

The Nexus 4 can connect to LTE band 4… but not to most other LTE bands. In the US, AT&T primarily uses band 17. But it turns out the company uses Band 4 in some markets — and if you’re in one of those areas, you may be able to connect by doing nothing more than entering your Phone Information menu and switching from WCDMA to LTE/GSM/CDMA auto.

Bear in mind, this is an unsupported feature and not only is it unlikely to work in most parts of the United States, but you can’t really complain to customer service if it doesn’t work properly or fries your phone. It’s an unadvertised feature, after all.