Ectacto has unveiled plans to launch a new eReader with a 9.7 inch Color E Ink display. So far the company has only announced launch plans for Russia, where the eReader is expected to hit the streets in March. 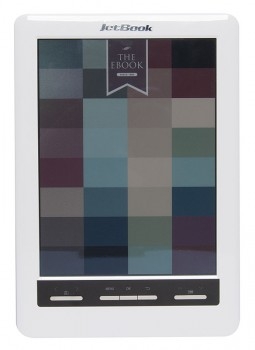 As you could probably guess from the name, the Ectacto Jetbook 2 isn’t exactly the company’s first color eReader. It’s actually a lot like the model we saw in January.

But the new model features a new E Ink Triton display which reportedly features better contrast and a brighter background.

The eReader features a 1200 x 600 pixel display with support for 4096 colors. It’s not exactly a replacement for the LCD display on your laptop, but like most eReaders, the Jetbook 2 has a low-power screen which relies on ambient light. Unlike a laptop or tablet, it should actually look better outdoors or when you’re shining a light directly at the screen.

The Jetbook 2 features an 800 MHz Freescale i.MX508 ARM Cortex-A8 processor, 512MB of RAM, 4GB of storage, and a microSD card slot for extra space. There’s a 2360 mAh battery which should provide quite a bit of run time.

It supports eBoks in a range of formats including EPUB, MOBI, HTML, FB2, and PDF, and supports Adobe DRM.

You can also play MP3, WAV, and MP3 files on the device or view images.