Now that Barnes & Noble is pushing the NOOK HD and NOOK HD+ tablets, the company is selling off its older tablets at ridiculously low prices. Just over a year ago the NOOK Tablet went on sale for $199.

Today you can get a refurbished model for $90. 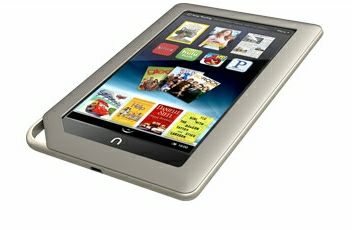 The company is selling of refurbished NOOK Tablets through its eBay store.

Unlike Amazon’s tablets, the NOOK Tablet also has a microSD card slot. You can use it to add extra space for books, music, movies, or other content.

Hackers have also found that microSD card slot helpful for loading alternate software onto the NOOK Tablet. While it ships with a custom version of Google Android 2.3 Gingerbread designed to work with B&N’s NOOK app and book stores, the NOOK Tablet has the guts of a reasonably good all-purpose Android tablet.

For instance, you can install CyanogenMod 10 on the NOOK tablet to get turn it into a nearly full-featured Android 4.1 tablet, complete with access to the Google Play Store. You can even install the NOOK (and Kindle) apps to read books.

Unfortunately the NOOK Tablet doesn’t have a camera, so you can’t use it to snap photos or make video calls, no matter what software you load on the device.

This low-cost NOOK Tablet deal might not last long. Barnes & Noble is no longer selling last year’s tablet on its website, and the company already phased out the 2010-era NOOK Color.

It looks like B&N is using its eBay store to sell off remaining inventory of its older tablets, while the retailer shifts its focus to the newer NOOK HD and NOOK HD+ tablets with faster processors, newer software, and higher resolution displays.