The Acer C7 Chromebook I reviewed last month is basically a stripped down laptop running Chrome OS instead of Windows. Acer sells the laptop for about $200. Now the company has a $300 model for folks looking for slightly better specs. 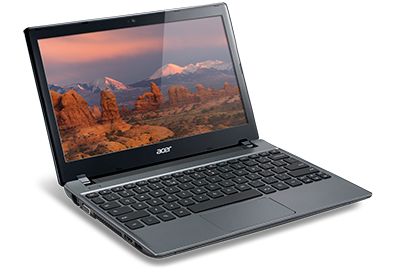 Update: Acer says the product page for this model was posted in error. The company is still determining what future variations of the Acer C7 Chromebook to release.

What makes the new model different is that it comes with 4GB of RAM instead of 2GB and a 500GB hard drive instead of a 320GB disk. Acer is also bumping up the battery from a 2500mAh to a 5000mAh battery pack which is said to last for up to 6 hours.

Honestly, you could probably upgrade the RAM in the original model yourself for far less money — although you’d have to break a sticker saying you’re voiding your warranty to open up the laptop.

While a little extra hard drive space is never a bad thing, it seems kind of unnecessary in a Chromebook, where the browser is the most important (and pretty much the only) app.

So the best reason to choose the $300 Acer C710-2605 over the $200 Acer C7 is probably the beefier battery. The model I reviewed managed to get about 4 hours of battery life, but the new model should get something closer to all-day battery life.

I also noted that the C7 I reviewed is capable of running Ubuntu Linux — but that battery life fell to just over 2 hours when running that operating system. It’s likely that the higher capacity battery in this new model would hold up a little better under Ubuntu as well as Chrome OS.