The MK802 II is a tiny computer that could be easily mistaken for a USB flash drive. But under the hood it’s got the guts of a smartphone including a processor, RAM, and storage.

You can plug the MK802 II into TV or monitor to bring Android apps to a big screen. Or you can hook up a mouse and keyboard and load a full desktop Linux operating system onto the device and use it like a cheap, tiny, and kind of slow computer.

The folks at w2comp have been kind enough to provide us with an MK802 II for the Liliputing 2012 Holiday Giveaway. 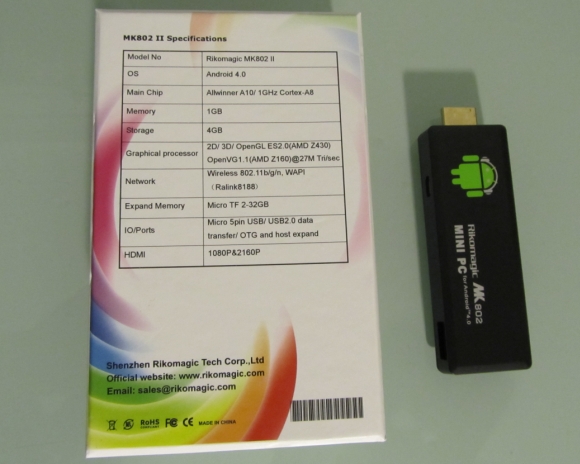 The unit we’re giving away features a 1 GHz Allwinner A10 ARM Cortex-A8 single core processor, 1GB of RAM, and 4GB of storage.

It comes with Google Android 4.0 preloaded, and you can use it exactly as it is. Or you can load another operating system onto a microSD card and dual boot Android and Ubuntu or a different OS.

While Chinese device makers have released faster and more powerful mini PCs in recent months, the original MK802 is still one of the most versatile of these little computers since developers have already put a fair amount of time and effort into porting operating systems ranging from Puppy Linux to CyanogenMod 10 Android to run on the MK802. We may also see a version of Bodhi Linux for the MK802 soon.

The MK802 II features the same processor as the original MK802, but it has an improved case design with vents for cooling, a micro USB port instead of mini USB, and an HDMI connector instead of a port. That means you can plug the stick directly into a TV or monitor without any cables (except a USB cable for power).

Keep in mind… if you’re looking to use the MK802 II as a desktop computer, it’s a pretty sluggish one. But it’s still kind of impressive that it can run everything from Firefox to LibreOffice. And if you plan to use it as an Android-based media center, the user interface is a bit clunky for navigating Netflix on your TV. But hey, it will let you watch Netflix on your TV.

But if you’d like to snag one for free, here’s how to enter:

Entries must be received by 5:00AM Eastern Standard Time on Thursday, November 29th, 2012.

Thanks again to W2Comp for supplying Liliputing with this MK802 II.