The Kobo Arc is a 7 inch Android tablet aimed at readers. It comes from bookseller Kobo, and the tablet’s expected to launch this month with prices starting at $199.

Today the Kobo Arc showed up at the FCC website, which suggests that it’s on scheduled to hit the streets soon. 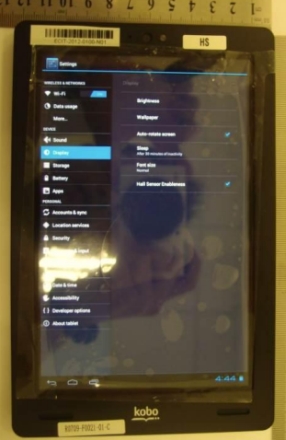 The tablet will ship with Android 4.0 Ice Cream Sandwich, but Kobo is working on an Android 4.1 Jelly Bean software update.

Unlike some other tablets sold by book stores, the Kobo Arc will include the Google Play Store for third party apps. But Kobo will also include its own store for digital book purchases, as well as its own eBook software and home screen with an emphasis on reading.

There’s a not a whole heck of a lot that the Kobo Arc offers that you couldn’t get by installing the free Kobo app on a Google Nexus 7 or another 7 inch tablet. But the Arc does have a few things going for it — Google doesn’t offer a 64GB Nexus 7, and tablets from Amazon and Barnes & Noble don’t include access to the Google Play Store.