The Samsung Galaxy Camera is a 16 megapixel point-and-shoot camera with a 21x optical zoom lens and a 4.8 inch touchscreen display. But it’s not the lens or screen which set it apart from most cameras on the market — it’s what lies under the hood.

In this case, it’s the guts of a smartphone. The Galaxy Camera has a 1.4 GHz Samsung Exynos quad-core processor, 8GB of storage, and Google Android 4.1 Jelly Bean software. It also supports WiFi and 4G LTE networks, letting you upload your pictures to Facebook, Flickr, Picasa, or just about any other site from just about anywhere. 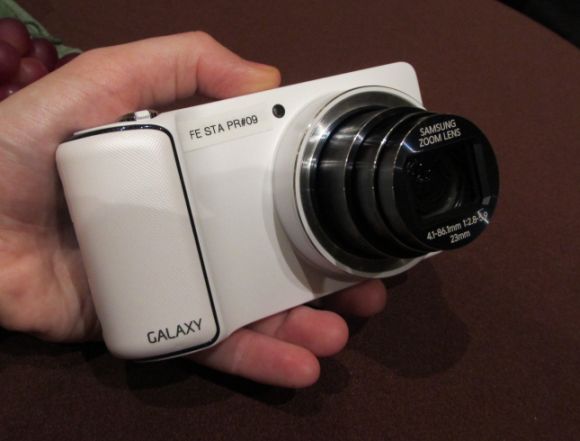 While I haven’t had a chance to test the camera extensively, I did get to spend a few minutes with it recently, and I can confirm that it’s capable of taking much better photos than a typical smartphone camera.

Not only does it have a higher quality image sensor and a decent optical zoom lens, but Samsung has also included software designed to give you plenty of control over the photo taking experience. Whether you’re surfing the web or playing a game, you can bring up the camera app almost instantly by pressing the shutter release button or an on-screen camera icon.

Once the camera app is open, you can either use automatic mode or adjust a wide range of settings to adjust the image.

What the Galaxy Camera doesn’t do is make phone calls. While it has a speaker and microphone, they’re not lined up properly for holding the camera to your ear and making calls. And there’s no headset jack, so you can’t plug in a wired headset.

The camera does support Bluetooth 4.0, so I suppose you could pair it with a Bluetooth headset to make phone calls over Skype or another Voice over IP service. But AT&T sells the Galaxy Camera like a tablet rather than a phone, offering monthly data-only plans, but no cellular voice plans for this device.

Maybe one day we’ll see smartphones with higher-quality camera lenses, but the Galaxy Camera is first and foremost a camera, not a phone.

It’s an interesting device, but it’d probably be even more interesting if there were a WiFi-only version with a slightly lower price for customers that probably aren’t going to pay for a monthly data plan just to upload images on the go anyway.