J&W’s MINIX Neo G4 is an Android TV stick that’s about the size of a USB flash drive. We’ve seen a lot of those lately. But there are a few things that help the Neo G4 stand out from the crowd.

It offers better power management than most, and has dual antennas for better wireless reception. The Neo G4 also comes with a remote control that works with a built-in IR receiver, letting you plug the stick into your TV and control the Android user interface from across the room. 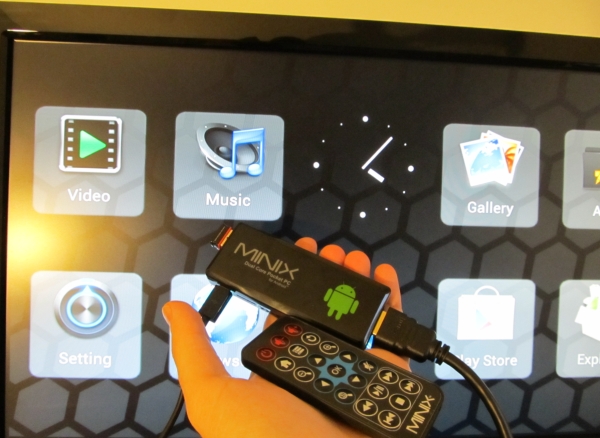 MINIX shipped me a demo unit to check out, and inside the box I also found a small HDMI adapter which you can use to connect the stick directly to an HDMI port on your computer. But you’ll need direct line-of-sight between the remote and the stick in order to use the remote — so if your HDMI port is tucked away on the back of your TV or monitor you might want to use a longer cable so that the Neo G4 rests in front of the display.

When you plug in a power source the MINIX Neo G4 will boot into Android pretty quickly. You have a choice of home screen apps. One option gives you the typical Android user interface that you’d expect from a tablet. The other option gives you a handful of big icons for options such as audio or video.

Using the built-in software I had a difficult time streaming movies from a shared network drive, but I suspect this may work better with third party apps. I fired up the Google Play Store and installed the official Netflix app though, and had no problems streaming videos over the internet.

Sometimes it takes a little while for the app to launch or for a video to load… but once it does, video playback quality is pretty good. Unfortunately the Netflix app is difficult to navigate using the remote control. Instead I plugged a wireless mouse receiver dongle into the USB port and used a mouse to navigate.

While I wasn’t really that impressed with the TV-friendly app launcher, it’s a nice option to have. And there were a few settings tucked away in that software which you don’t get with most Android TV sticks, including an app that lets you adjust the size of your display window.

In other words, if you’re having problems with content not fitting on the screen, or with big black bars surrounding the Android user interface on your TV, you can adjust the settings to make everything fit the screen. One of the key differences between the MINIX Neo G4 and most other Android Mini PCs that have flooded the market since the launch of the popular MK802 is the fact that you can turn off the Neo G4 without unplugging it.

You can also turn the Neo G4 back on by pointing the remote at the stick when it’s turned off.

Since the Neo G4 is powered by the same Rockchip RK3066 processor used in the UG802 and MK808 mini PCs, you may eventually be able to install Ubuntu or other desktop Linux operating systems on this device.

But for now it ships with Google Android 4.0 and provides an acceptable way to watch Netflix, surf the web, or play Angry Birds on your TV.