The Acer C7 Chromebook is a $199 laptop which runs Google Chrome OS. But aside from the price and the operating system, there’s not much that sets the C7 apart from your average portable notebook. In fact, if the Acer C7 looks familiar, it’s because it’s virtually identical to the Acer Aspire V5-171 Windows laptop I reviewed earlier this summer.

Acer basically took that $500 laptop design, made a few changes to save money, and slapped Chrome OS on the hard drive. And that’s not necessarily a bad strategy. 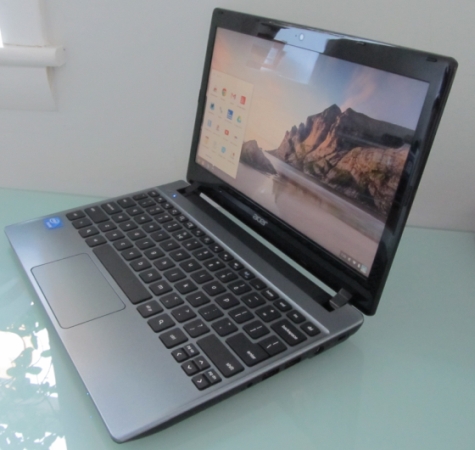 Google and Acer loaned me a C7 Chromebook to review. I’ll have more details in the next week or two as I’ve had a chance to put it through the paces, but I wanted to share some initial thoughts.

The laptop features a 1.1 GHz Intel Celeron 847 processor, 2GB of RAM, and a 320GB hard drive. It’s the first Chromebook to ship with a hard drive, which means it has more storage capacity than earlier Chromebooks, but it also boots a little more slowly and generates a bit more heat than some. Unlike the Samsung Chromebook with an ARM-based chip, this model has ventilation on the side, and you can hear the fan running from time to time.

Chrome OS is basically an operating system designed around a web browser. It boots quickly because it only really has to support the browser and doesn’t have to load other apps and drivers. But you can use a web browser to do everything from creating and editing documents to watching videos to logging into a remote desktop computer.

It takes about 20 seconds to cold boot the C7 Chromebook, but it resumes from sleep virtually instantly.

While the Celeron processor isn’t as powerful as the Core i5 chip that you get with the Windows version of this laptop, the C7 seems very responsive so far. I’ve had no problems loading any websites or streaming 720p HD video over the internet from Netflix or YouTube.

I’ll run some web-based benchmarks soon to see how the C7 compares with the latest Samsung Chromebooks featuring ARM and Celeron processors — the Samsung Chromebook 550 has a faster 1.3 GHz Celeron 867 CPU, but that model also has a starting price of $450.

Google says the 37Whr battery is good for up to 3.5 hours of battery life, but an Acer rep tells me that the company may decide to offer a higher capacity battery for customers that value long battery life — and who are willing to pay a little extra to get it.

The C7 also happens to be the first Chromebook to feature a user replaceable battery — so there’s nothing stopping you from picking up a spare battery (if you can find one) and effectively doubling your battery by swapping out batteries as needed.

Aside from the hard drive and removable battery, there’s one more thing that sets the Acer C7 apart from other Chromebooks: Its keyboard. 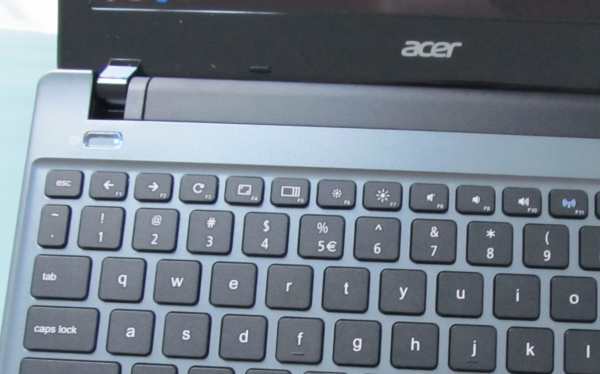 Like other Chromebooks, the Acer C7 has dedicated keys for search, forward, back, and navigating browser tabs and windows. But Acer didn’t sacrifice the Caps Lock key to make room for the search button. The C7 has one of each.

Also, if you look at the special function keys closely, you’ll notice that the top row also feature tiny letters and numbers marking F1, F2, F3 and other keys. In other words, if you run across a website that requires an F6 input, you can make it. Perhaps more importantly, though, if you decide to install an operating system other than Chrome OS on this laptop, you won’t find yourself missing important keys like F2 or F11.

Since the Acer C7 Chromebook has a 320GB hard drive and an x86 processor, there’s little stopping you from installing Windows, Ubuntu, or other operating systems on this $199 laptop. Out of the box, the computer is configured only to boot into Chrome OS. But like all Chromebooks released to date, it’s a developer-friendly device and Google provides a way to unlock the device and enter developer mode.

I wouldn’t be surprised to see folks take advantage of that option to turn the Acer C7 into a Windows or Linux laptop or figure out how to dual boot Chrome OS and another operating system.