Rockchip’s RK3066 chip is a dual-core ARM Cortex-A9 processor with clock speeds up to 1.6 GHz. The processor is popular with Chinese tablet makers, and a growing number of USB thumb drive-sized mini computers and TV dongles (such as the UG802 and MK802 III) use the RK3066 processor.

Most of those devices ship with Google Android, and since Rockchip doesn’t tend to release a lot of source code for its processors, it had seemed like that was the only operating system they would run. But developer AndrewDB has been making some serious progress porting Ubuntu 12.10 Linux to run on the UG802 (and other RK3066 devices). 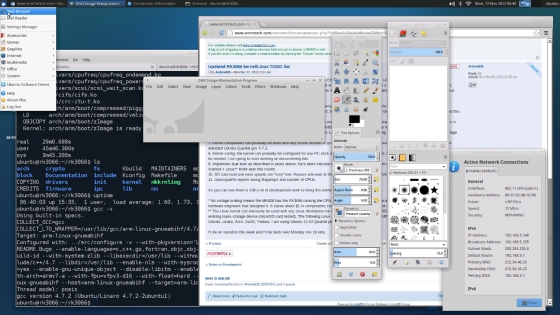 The work was made possible when the makers of the bq Edison tablet released the source for that tablet’s kernel.

A couple of developers have started working with that kernel to enable support for full-fledged desktop Linux operating systems on devices with RK3066. But AndrewDB’s been one of the most visible, posting a number of progress updates (and pictures)  over the past few weeks in the ArmTVTech and SlateDroid forums.

At this point, Ubuntu for the UG802 is still pretty rough around the edges. WiFi only works when AndrewDB plugs in a USB WiFi dongle. You can also use a Bluetooth dongle, but it’s buggy. And USB transfer rates are low.

On the other hand, he’s already managed to get the device to work with 1080p monitors using the built-in HDMI port, and CPU controls seem to work (for now AndrewDB says running at top speed at 1.6 GHz could cause heat problems though).

There’s a lot of work to be done, and AndrewDB’s on vacation for the next, so don’t expect a completely usable build of Ubuntu 12.10 for RK3066 devices tomorrow. But a lot of progress has been made in a relatively short period.