Dell has knocked $100 of the price of its first ultrabook to ship with Ubuntu Linux. Yesterday the company started selling the Dell XPS 13 Laptop, Developer Edition for $1549. But some astute observers noticed that the price was $50 more than Dell was charging for an identical Windows ultrabook.

Now you can get the Ubuntu model for $50 less than the Windows version. It’s available from Dell for $1449. 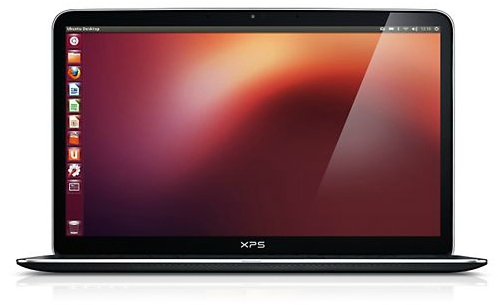 That’s still a lot of money to pay for a laptop, but the price now better reflects the fact that Dell doesn’t have to pay Microsoft a license fee for Windows software.

On the other hand, the developer edition laptop doesn’t include any so-called “bloatware” such as free trials of security software, office suites, or games. So Dell also isn’t getting paid to include any software on the laptop — something that sometimes helps offset the price of Windows computers.

It measures 0.71 inches thin, weighs less than 3 pounds, and has a case made of aluminum, carbon fiber, and magnesium.

Dell calls this a developer edition laptop, and is targeting it specifically at web developers. But I think primarily the company wants to make it clear that this is a laptop designed for customers who are comfortable with Linux software, and the developer moniker should help ward off folks just looking to save a few bucks on a well specced portabled notebook.

12 replies on “Dell XPS 13 Ubuntu ultrabook gets a price cut, now cheaper than the Windows version”