The Asus VivoBook X202e is a thin, light, and reasonably affordable Windows 8 laptop with a touchscreen display. It’s a little too thick to be called an ultrabook, and Asus sells the notebook with hard drives instead of solid state disks.

But the VivoBook X202e features an Intel Ivy Bridge processor and it should be almost as zippy as a typical Windows 8 ultrabook.

Unfortunately, it looks like it’s also just about as tough to upgrade as a typical ultrabook. 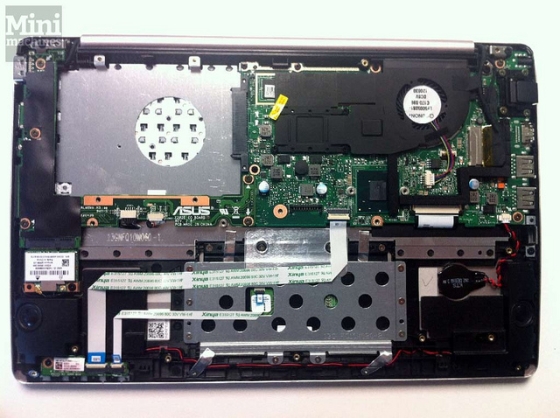 The folks at MiniMachines.net took apart an Asus VivoBook X202e to see what’s under the hood. There are no access panels on the laptop, so you can tell Asus doesn’t really expect you to perform any repairs or upgrades yourself… but you can remove the entire base of the laptop by taking out a few screws.

Once you do that you can remove the 2.5 inch hard drive and replace it with a larger or faster disk. And that’s about it for simple repairs.

The battery can technically be replaced, but it’s a non-standard battery that’s hidden inside the case — I doubt it will be easy to find third party replacement batteries.

Asus solders the RAM to the motherboard, so there’s no way to upgrade the memory. Fortunately the VivoBook X202e comes standard with 4GB of RAM, which should be enough for most tasks. But if you need more memory than that, you’ll probably need a different laptop.

6 replies on “Asus VivoBook X202 dissected: Almost as tough to upgrade as an ultrabook”