Amazon Kindle Fire owners aren’t the only folks that can download apps from Amazon’s Appstore for Android. The company has actually offered a standalone app for Android phones and tablets since before Amazon launched the first Kindle.

This week the company updated that app, improving support for Google Android 4.2. The new version also has a shiny new user interface which looks a lot more like what you’d see on a Kindle Fire tablet. 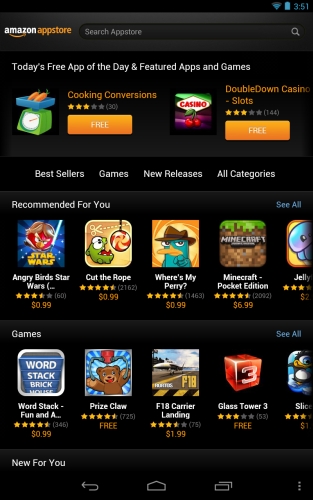 You can also now remove apps from the My Apps section by long-pressing on the icons.

The biggest improvement is a fix for a problem that had been plaguing Android 4.2 users. Amazon’s Appstore had periodically been logging users out. Versions 4.3.14.3C and later should no longer do that.

While the Google Play Store still has a much wider selection of Android apps than the Amazon Appstore, there are a few reasons you might want to try Amazon’s store. First, the company offers a “free app of the day,” from its library of apps that are normally paid.

Second, from time to time you’ll find good deals on other apps, where prices are occasionally lower than in the Play Store.

Most importantly, once you’ve installed an app from the Appstore, you’ll need to keep the store on your device in order to run that app. So if you do snag a good deal on an app — or if you’ve purchased an app on a Kindle Fire and want to run it on your phone, you’ll need to keep the Appstore installed. This will also help you download updates for any downloaded apps as they become available.