Acer may be preparing to launch its second Chromebook soon. French blogger Pierre Lecourt has published the first pictures of an upcoming Acer laptop running Google’s Chrome operating system. It’s called the Acer AC710 Chromebook, and the laptop has a familiar design. 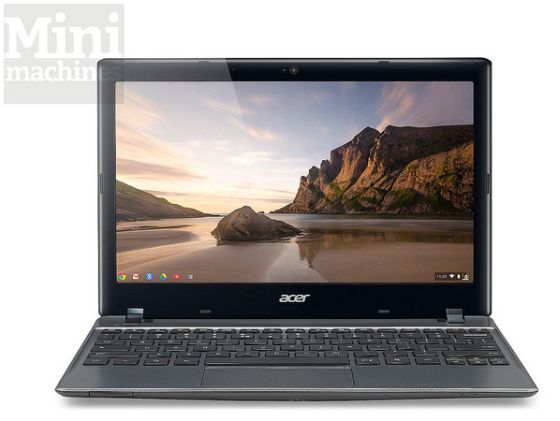 That’s because it looks virtually identical to the Acer Aspire V5-171 notebook I reviewed this summer. The key difference is that the V5 laptop runs Windows, and the AC710 has a Chrome logo on the lid and runs Chrome OS software.

Honestly, that’s about all we know at this point.

It’s nice to think that Acer’s next Chromebook will have a speedy processor or more RAM than earlier models. But Samsung has demonstrated that even an inexpensive ARM-based processor can get the job done. And one thing we’re unlikely to see from the new model is a massive hard drive. Google has been pretty insistent that Chromebooks should have small, but reasonably fast solid state disks.

There’s no word on when the Acer AC710 will launch or how much it will cost.

You can find more photos of the AC710 at MiniMachines.net. And if you’re looking for confirmation that the upcoming Chromebook will have the same case as the Acer Aspire V5-171, you can already pick up a spare LCD screen or bezel from parts distributors.

4 replies on “Acer AC710 Chromebook on the way”