Microsoft is launching two new operating systems tomorrow: Windows 8 and Windows RT. The first is designed to run on computers with x86 processor and includes support for most apps designed for Windows 7 and earlier. The second looks like Windows 8, but it’s designed to run on tablets and other devices with ARM-based processors.

That means Windows RT devices can be thinner and lighter than Windows 8 computers, use less energy, and potentially offer longer battery life without enormous batteries. But they won’t run apps designed for older versions of Windows — or any apps that aren’t available in the new Windows Store.

So why get a Windows RT device instead of an iOS or Android tablet? 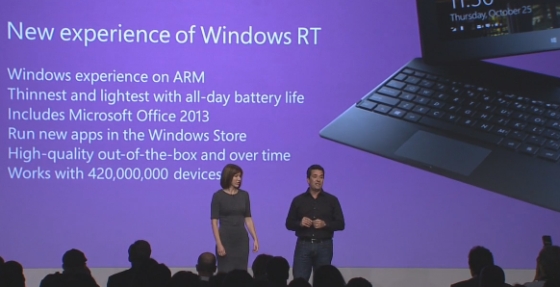 There are at least two key selling points. The first is that Microsoft includes Office 2013 RT with Windows RT.

The second is that Windows RT includes support for a huge range of peripherals. It works with many of the printers, keyboards, monitors, mice, and other devices designed to work with traditional computers.

You’ll be able to connect a Windows RT tablet or other device to those peripherals via USB, Bluetooth, or other wireless technologies.

Microsoft says right now there are 420 million peripherals that will work with Windows RT devices. While Android and iOS have gradually added support for additional peripherals, it can be tough to connect tablets running those operating systems to printers, webcams, or other devices.

Do Office 2013 RT and peripheral support make up for the fact that there are far more apps available for Android and iOS than for Windows RT? Maybe. Microsoft has been working with developers and some of the best apps for those platforms are already in the Windows Store.

So far I haven’t seen much difference between prices for ARM-based tablets running Windows RT and Windows 8 tablets with Intel Atom Clover Trail processors. You might get slightly better battery life or slightly thinner and lighter designs with ARM chips… but the differences are pretty negligable, and it’s hard to see why you’d choose a Windows RT device over one running Windows 8.