German eBook seller txtr’s new eReader has a 5 inch, 600 x 800 pixel display and weighs just 128 grams, or about 4.5 ounces. While there are eReaders with smaller screens, the txtr beagle is probably the lightest model with an E Ink display, and the company describes it as the “lighest and smallest” eReader.

It may also be one of the cheapest. The company plans to sell the beagle for about €9.90 ($13) in Germany — but that’s the price of a model that’s subsidized by a wireless carrier. It’s not clear how much you’ll have to pay to get the eReader without a contract. 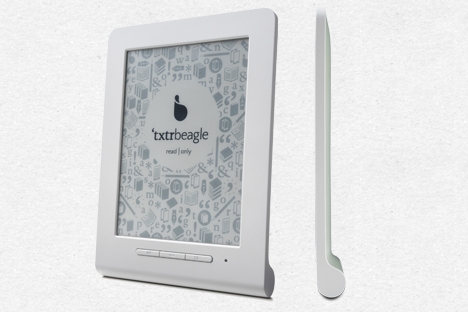 The beagle runs on 2 AAA batteries and txtr says you should get enough battery life to read 12-15 books before replacing or recharging the batteries.

While the txtr beagle doesn’t have a touchscreen or front-lit display like some of the other eReaders on the market, it does have Bluetooth. That means you can pair the eReader with an Android smartphone running the txtr app in order to transfer eBooks from your phone to the beagle.

I guess that’s why txtr expects to sell the device through wireless carriers. It doesn’t have any built-in WiFi or cellular capabilities of its own.

The txtr beagle includes 4GB of built-in storage and can handle EPUB and PDF eBooks.